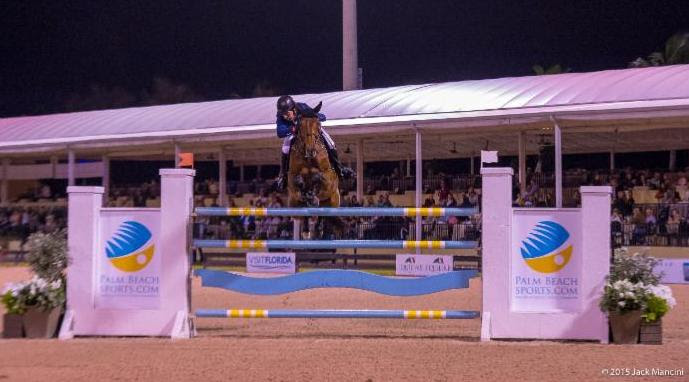 Wellington, FL – November 28, 2014 – In an exciting jump-off finale, Conor Swail (IRL) and Viva Colombia finished with top honors in the $212,000 Holiday & Horses Grand Prix CSI 4* presented by Palm Beach Sports Commission and Discover the Palm Beaches at Palm Beach International Equestrian Center (PBIEC). Swail and Viva Colombia bested the talented jump-off of eight competitors with a time of 37.922 seconds. Eugenio Garza (MEX) and Bariano finished just off the pace for second place, crossing the timers in 38.25 seconds while Hardin Towell (USA) and New York posted the remaining double clear effort of the night with a time of 39.072 seconds. Competition will conclude at PBIEC tomorrow with the $34,000 Consolation Classic beginning at 1pm.

The class of 32 competitors in the grand prix faced a difficult track set by course designer Anthony D’Ambrosio (USA), which had eight competitors move forward to the second round, while nine pairs dropped a rail on course, incurring four faults. Tiffany Foster (CAN) and Victor were the only duo to finish with a single time-fault in the first round and would finish in ninth place.

Swail rode late in the order aboard Viva Colombia, a 2005 Oldenburg mare (Couleur-Rubin x Lando Lady) owned by Ilan Ferder, and made the most of his trip around the track, which called for scope and adjustability.

“We had planned to leave Viva for tonight. A good friend of mine, Ilan Ferder, owns her and I’ve had a really good year with her. She’s just getting better and better,” said Swail. “I thought tonight she was just wonderful and jumped great in the first round. Things worked out for me in the second round with Samuel [Parot] and Kent [Farrington] being a bit unlucky, but for me it felt like we were going to be close and I wanted to go for it.”

Garza would finish with the first double clear effort of the night, which seemed tough to beat, as Towell followed but couldn’t reach the 38 second mark. A single rail burdened Parot and Farrington, who blazed around the course, both finishing in less than 37 seconds. Farrington, piloting longtime partner Uceko, seemed to have all but added another win to their record after dashing through the course in a nail-biting effort, but a rub at the final vertical kept Farrington from his second win this week, as the duo added four faults for fourth place.

Towell was proud of his third place finish aboard New York stating, “Tonight was a great class and I was really happy with New York’s performance. We got him a couple of months ago and he’s been out of the spotlight a bit compared to my other horses Emilie and Lucifer. I was really proud of how he handled everything tonight.”

“I think he’s really stepping it up and I’m looking forward to what he has in store for the future. I am so thankful to have the support of Jennifer Gates behind me with all of the horses and it feels great to have finished so well in a very competitive class,” he continued. “Conor is a close friend and it’s never fun to lose but I’m so happy for him that he won. Eugenio rode great and is really stepping up to the plate in the bigger classes. I think it was a great show of talent tonight.”

Motivated to finish with a respectable result, Swail felt the course was well-suited for his mare, even though the track proved difficult for many of the night’s competitors. He elaborated, “I thought the course looked quite nice when we walked it and it wasn’t so big, but it was extremely careful and there was a bit of width on the oxers. In that respect, you needed a really good horse to jump around it.”

In a careful but quick effort, Swail nudged out Garza for the fastest double clear effort in the jump-off, pushing for the final finish and earning his 23rd FEI victory of the year. Viva Colombia, both talented and scopey, has proven her consistency in many of the large FEI classes the duo have contested together this year.

“For me, when I got her in the beginning, I felt like it was really important for her to gain confidence in our program and our system. I worked on her balance a lot this year. The carefulness and scope was always there with her. I wanted to focus on making her stride a bit more adaptable and adjustable. I think now she’s really learned that throughout the year and has been very successful,” he continued. “Viva has been quite fast and has won several speed classes too, which has helped her be a little bit quicker in her mind. The balance has gotten a lot better, and she’s much more adjustable.”

Swail had a tremendous fall season and collected numerous wins during the indoor circuit season. He will now give his string a rest before looking towards the commencement of the Winter Equestrian Festival circuit in just a few short weeks at PBIEC.

“She’ll get a nice break. She deserves it. We probably won’t bring her out again until week four or five during circuit. It’s been great to finish the way we have with her, and she’s just fantastic,” he noted. “Her consistency has been extremely solid, and I’m delighted for Ilan and myself that things are going well. We have a real quality horse on our hands.”

Steadily shifting up the world ranking leaderboard this year and currently sitting in 37th, Swail has set his sights on reaching the top ten in 2016.

“I’d really like to get into the top ten in the world. It’s a pretty big goal, but I’m 37 now and feel like that’s where I need to be. I know that what I need to do is get a few bigger grand prix wins this year. I think I have enough ranking class wins, and it’s time to focus on getting good results in those bigger classes. I don’t think I could have had a better start than tonight,” he said. “I want to focus on improving those results so that’s kind of what the main goal is right now. We have some very nice horses, and we’re looking forward to another great go at it this season.”

The Holiday & Horses CSI 4* will conclude tomorrow with the $34,000 Consolation Classic beginning at 1pm in the International Ring. For more information and to see a full list of results please visit  www.pbiec.com.

Photo Credit: ©ManciniPhotos. These photos may only be used one time in relation to this press release.

This weekend TMS was present at CSI 3* Opglabbeek. On thursday Diesel GP du Bois Madame started amazing, jumping clear but unfortunately one time penalty was noted. Also the other days Diesel jumped clear but had to tolerate some time penalties. On friday also Hetman of Colors was clear in...
08-11-2015

Pin Up D'Hammer and Vincent Lambrecht showed again their amazing qualities. This time they won the 1m40 Grand Prix in Moorsele. Vincent Lambrecht was also second with Diabeau, followed by a 3rd place for Frederic Cattebeke.
08-11-2015

Vincent Lambrecht and Honoust Lady were 3rd in the Grand Prix in Moorsele last weekend. The clear round can be seen here: https://youtu.be/93W-teKO-ts
07-11-2015

Last week in Lexington, Kentucky, Conor Swail and Viva Colombia jumped at 1m60 top level.  After a superb clear round and a clear jump-off they ended 7th in this CSI4* competition.
02-11-2015

On the last day of the autumn tour, Strangelove Ennemel jumped again a double clear, this time finishing 2nd in the 1m40 class at Csi2* Oliva Nova.
31-10-2015

Yesterday in the 1m30 Small Grand Prix qualification in Moorsele, Vincent Lambrecht and Pin Up D'Hammer won again. This time, they beat the competition in 25,96 seconds! Also Honoust Lady jumped a clear round in this class, finishing 7th in the ranking.
31-10-2015

Castilion and Abdel Said werd clear yesterday in the 7y old class at CSI 2* Opglabbeek. Also Chloe did a good job and was clear with both Quillota LS and Aliante in the 1m40 GP Qualifier. Quillota finished 4th and Alicante was good for a 13th place.
01/03
Back to news page
fMarkMenu(260);