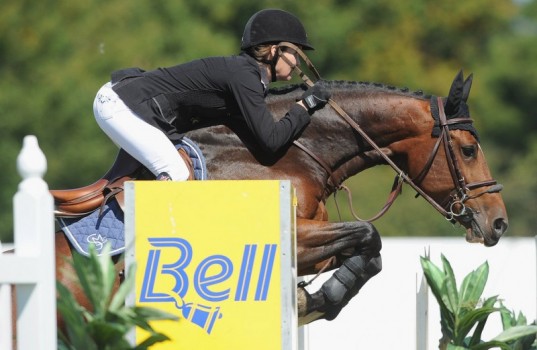 Share
It promised to be a battle of the ladies in the Bayer FEI World Cup final. Eleven started the prestigious class, with just three going clear in the first round. Eight came back for the second round over the Gerrit Beker-designed course. Series winner McIntosh was pleased with the effort of her top horse Estina. "I wanted to concentrate on Estina, and it proved the right thing to do," she said.
Throughout the six rounds, McIntosh and her horses haven't finished worse than fourth. All but one set of the points came from Estina, a mare who has grown into herself this season. "She is just so much more settled and is working with me a lot more . . . it all takes time."

All Class From Estina in World Cup

The former Olympian and World Champs representative, Samantha McIntosh, won the World Cup in Taupo, aboard her sometimes feisty mare Estina, backing up their victory in the world cup round at Feilding earlier this month. Samantha states; "Estina is as brave as a lion and just knows when to step...
15-12-2013

Cantando Lyngriis jumps in the picture in Geneva

At the international showjumping competition in Geneva, Switzerland Tal Milstein Stables provided one of the tophorses in the 1m45 speedclass. Under the saddle of Daniel Bluman, the 12-year-old Holsteiner Cantando Lyngriis  (Cassini I x Zarewitsch XX) jumped to a second place.  Finishing without touching the wood in  a time of...
08-12-2013

Estina all class in World Cup

Samantha McIntosh may be an Olympian and a World Champs rider but her victory today in the World Cup at the Royal A and P Show in Feilding, New Zealand is a first. Aboard the nine-year-old Belgian imported mare Estina, McIntosh (Cambridge) headed home 12 other combinations. The combination have...
22-11-2013

In the first qualifier for this year's Mechelen Freejump contest for Young Horses the popularity of Doree van de Moskifarm, a stallion ridden by Tal Milstein Stables-rider Perry Geryl is by far the most popular sire. From the 50 starting horses, Doree has no less than 3 young freejumpers at...
19-11-2013

Czardes stays on top in Toronto

In yesterday's $50,000 Weston Canadian Open class in Toronto, Canada Ward McLain and the 10-year-old Hannoverian Czardas (Contendro x Grannus) scored a clear round. The pair ended up in the fifth place after a clear round in 62,44 seconds.
06-11-2013

At the Royal Horse Show in Toronto, Canada the worldcup competitors arrived at the beginning of this week. In yesterday's opening $33,000 Jolera International Jumper Welcome Kirsten Coe and the 9-year-old Zojasper (Concorde x Jasper) finished clear in a time of 64.63 seconds, good for a sixth place. Earlier that...
31-10-2013

Last weekend our rider Perry Geryl entered the CSI 2*-event in Genk, Belgium. The indoor season can start again. Aboard the impressive grey Elton Jones (Clinton x Elegant D'ile) Perry scored a double clear round in the 1m30-class on Saturday. Ending the time in 16:88 seconds it brought the pair...
28-10-2013

At the international worldcup event in Del Mar Tatiana Dzavik and the 10-year-old Delphine DH (triomphe de Muze x Capitol) placed 8th in the $25,000 GGT Footing Grand Prix Series Final, with a total of 60 entries.
01/03
Back to news page
fMarkMenu(260);