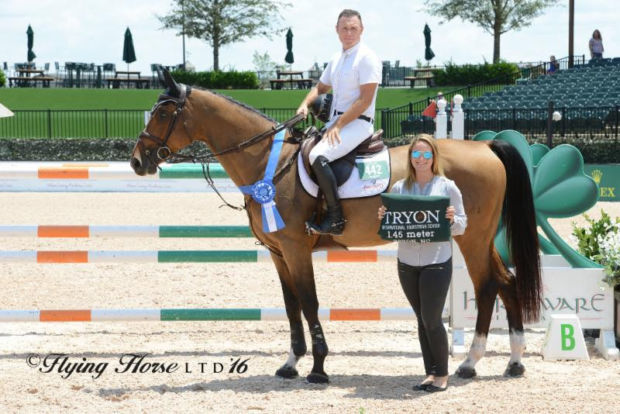 Wordley and Famoso D Ive Z, a 2007 Belgian Warmblood gelding (For Pleasure x Radetzky) owned by The Sky Group and Sharn Wordley, made quick work of the track set by Michel Vaillancourt (CAN) to secure the win. The class saw 29 entries test the course while ten combinations finished fault free. Wordley piloted Famoso D Ive Z to an efficient and quick round, which Wordley said will serve as good preparation for the rest of the week ahead.

“I went in with a plan to go as quickly as I could because I knew there were some really fast ones in the class behind me. I had to start fast to begin with because there’s always a lot of speed demons coming in behind you,” laughed Wordley. “I got lucky because there were a few that were pretty fast combinations in here today, but they ended up having rails.”

Impressed with the course design by Vaillancourt, Wordley spoke about the track and how he felt he sealed the win, stating, “Michel’s courses are always great. It was technical, but smooth. You can always ride it well. It was a great course and it had a lot of options, which is what allows you to find different ways to win.”

As for Famoso D Ive Z, Wordley has taken his time getting to know the gelding, as he was only purchased in late fall of 2015. According to Wordley, he can be a bit quirky, so establishing a routine and instilling a sense of confidence has been important over the course of their partnership.

“I got him at the end of the fall and he has been really good. He’s a really good horse and he’s only nine, but he can be a bit spooky at everything,” said Wordley. “It’s taken him a while to really concentrate, but he seems to now be feeling more comfortable and is starting to focus. He’s going to be a really good horse. He’s fast and he’s careful.”

“I think he has a lot of potential to be a real great horse at the top levels. He’s going to do the 1.50m class tomorrow and then on Sunday we have him aimed at the $25,000 Grand Prix too,” he continued.

Wordley is coming off of a strong winter campaign at the Winter Equestrian Festival (WEF) and will look to continue that form through the summer season. With a growing string of top level mounts, he will look to continue securing top placings in the FEI ranking classes, while also giving his greener horses an opportunity to gain experience in the ring.

“Barnetta is feeling a bit fresh this week, but the plan is to jump all three ranking classes including Saturday night with him and then Auckland De L’Enclos will also do the 1.50m class tomorrow as well,” commented Wordley. “I have a great string and they’ve all been going very well to this point in the season. I’m looking forward to what we have in store.”

“This is an amazing facility and the prize money is just fantastic. It is a lot of weeks here and if you can manage to stay focused during each week, it becomes a very competitive facility for all of the riders,” he added.

The Global Champions Tour in Chantilly couldn't have started better! In the 1m50 CSI5* Class, Jérôme Guery and Alicante proved to be absolute worldclass! Guery’s impressive speed resulted in the top spot that was over a second faster than the rest of the field in 69.83 seconds. Also Daniel Bluman...
23-05-2016

Chloé Vranken and Tahis de Masure finished 5th in the Young Rider Grand Prix in Odense! They had an excellent weekend, after already a 1st place in the YR Nations Cup on Friday!
23-05-2016

Alberto Michan was competing with the horses in Old Salem, New York, last week. With J'adore van het Klinkhof he finished 3th and 4th in the 7 year old class. Also Elliot jumped a clear round in this class! Baronez also competed in the Open Jumper class and finished 6th....
20-05-2016

Chloé Vranken went to CSIO Odense this weekend and so far, the results are excellent! On Thursday, Elton Jones jumped a clear round in the CSI3* 1m50 class. In the CSI3* 1m35 Chloé and Chin Quin finished second! On Friday, Chloé and Tahis de Mesure were part of the Belgian Young...
14-05-2016

Alberto Michan and J'adore van het Klinkhof were jumping this weekend at Old Salem Farm. Together, the combination jumped to a 4th place in the 7-year old class.
06-05-2016

This week Alberto Michan and Conor Swail participated at CSI4* Coapexpan, Mexico. The week started good with a 4th place for Michan and Gigolo van de Broekkant in the 1m40 and a clear round as well with Hetman of Colors in the same class. In the Coapexpan Cup, Conor Swail...
01/03
Back to news page
fMarkMenu(260);