Coverage of BWFA Amb. Luigi to win during CSI-YH Finals! 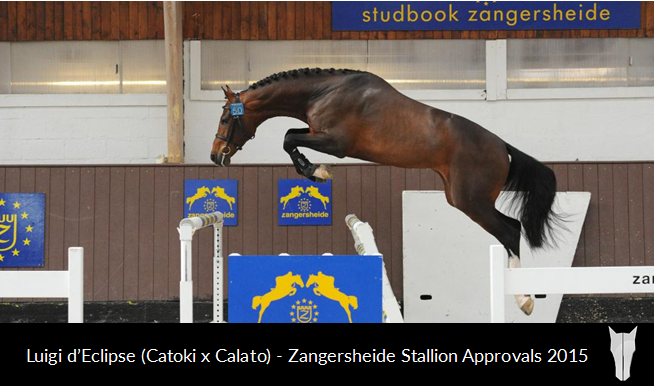 Four years ago, he was purchased by Tal Milstein Stables during the BWFA. He then already stood out with his exceptional appearance but also his motherline promised much good! Luigi D'Eclipse is a four-year old stallion by Catoki out of a Calato mother. The grandmother of this stallion is no one less than the 1m60 jumping Aluna. Together with Niels Bruynseels she became Belgian champion in 2010 and she was alreadt several times part of the Belgian team, for example at the European Championships in Windsor but also in La Baule, Aachen, Falsterbo, ..
Luigi proved his exceptional quality this year at the spring trials in Zangersheide where he convincingly jumped to the title of approved stallion! Because Tal Milstein Stables knows like no other how important breeding is for the horses of the future, he gives away a coverage of Luigi for the breeding season of 2016, for the winner of the 6-years old finals and the winner of the 7-years old finals during Flanders Horse Event.

Today was the first day for the participants of the CSI-3* at Flanders Horse Event. The price Tal Milstein Stables for six year olds yielded no less than 27 flawless combinations. For our rider Ivo Biessen there was also a clear round with Jaita Versoe (S. Der Senaat III). In...
30-07-2015

Zojasper keeps up the good results!

Zojasper is again being very consistent and got placed 4th on both days he was jumping!
30-07-2015

A good start for Zojasper and Jerome Guery at their first show in Lummen .  Jerome rode Zojasper to a 5th place in the Qualification for the GP on friday .
14-04-2015

We wish the best of luck to Kirsten Coe, Czardas,Baronez & Lovsta Stuteri at the World Cup Final in Las Vegas .
09-04-2015

Last weekend we were at Z-Stallion Approval with our 4-year ‘Luigi d’Eclipse’ where he was greatly appreciated by the jury & spectators. On Sunday he got the approval from the jury. Tal Milstein purchased Luigi d’Eclipse during the 2011 BWFA foal auction. More information about the horse & BWFA you...
09-04-2015