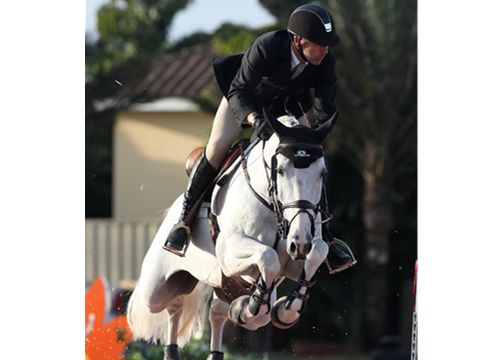 The 2015 Winter Equestrian Festival (WEF) kicked off with its first day of competition at the Palm Beach International Equestrian Center (PBIEC) in Wellington, FL, on Wednesday and a win for Olympic gold medalist Eric Lamaze in the first class of the day. Lamaze and the nine-year-old Zangersheide gelding Check Picobello Z (Cardento x Orlando) jumped to victory in the morning's $8,000 1.45m speed class over Adrienne Sternlicht and S&L Slingback. The 12-week WEF circuit runs through March 29, 2015, awarding over $8.2 million in prize money.

Eric Hasbrouck (USA) is the course designer in the International Arena at PBIEC for week one competition. He began the day with twelve entries in the 1.45m speed class with five clear rounds. Eric Lamaze set the pace with the first clear round aboard Artisan Farms LLC's Rosana du Park in 71.56 seconds to eventually place fourth. Marie Hecart (FRA) jumped next to earn the fifth place time with Rogelio Pellerano's Quatour de B Neville in 77.67 seconds. Leslie Howard (USA) briefly took over the lead in 71.32 seconds to finish third aboard her own Moondoggie. Adrienne Sternlicht upped the pace with Starlight Farms LLC's S&L Slingback in 71.28 seconds to place second. Last to go, Lamaze took the win with Check Picobello Z in 68.88 seconds.

Owned by Artisan Farms LLC and Torrey Pines Stable, Lamaze explained that Check Picobello Z was purchased as a six coming seven-year-old from Ilan Ferder and is moving into the next level this season after a few years of careful development. "I was crazy about this horse from the beginning," Lamaze stated. "When I got him he was a little bit of a difficult horse in his mouth, but his instinct and the carefulness and everything else was there, so I really took my time. I had a plan with this horse from the beginning and I stuck to it. I did the right amount of shows every year and did the right height and everything and this season he is ready to go. He will be one of my top horses this year for sure."

Check Picobello Z had a successful summer in 2014 with a great tour in the 1.45m FEI classes at Spruce Meadows as well as top finishes in the young horse classes in Aachen. He then had the rest of the year off and is coming back fresh for the winter. "I felt he had enough mileage and the only thing left to do now is go jump big fences," Lamaze explained. "Our plan was to start him here early, give him some classes, and then produce him as my main horse, so it was a perfect start to the season."

"He is very intelligent," the rider described. "He is so intelligent that he never thinks he is in trouble, so he can be a little difficult in the mouth, but in his head it is never a problem. For the rider sometimes you feel like, 'If you would just let me ride you a little bit better,' but he is really intelligent and a great personality. He loves to compete, and he has all the right reactions of a great horse."

In Wednesday's class, Lamaze went first with the ten-year-old Selle Francais mare Rosana du Park (Kannan), who competed last season with rider Carly Anthony. "We give Carly a few young horses to bring along for us, and she had some fantastic results with the mare," Lamaze detailed. "I took over riding her in Chantilly this year. Some horses are good, but they are well served being brought up by a rider who is going to give them all the experience in the world. This mare had all the mileage with Carly, and I felt she was ready to compete. That is also a horse that I am going to use as my main horse this year."

Following his winning round, Lamaze also spoke about the morning's speed track, stating, "It is the opening day. I think it was fair. Eric Hasbrouck is a very good course designer. He was a great rider himself, so I think he knows what an opening day at a show should be. I always feel that there are great course designers that haven't ridden in a while or maybe never rode, but the ones that have ridden and not long ago, it seems to me that they are more sensitive to what the sport needs and what to set up on a day like today or a difficult week when perhaps it is only a two-star but you have five-star riders with five-star horses. It is difficult to build, but I always find that the course designers who have recently ridden are very sensitive and always understand."

"These are my one-two horses for the next two weeks," Lamaze explained. "Then I have Fine Lady that is coming out and some others. I have a great group of horses this year. I rested them all. I didn't compete after Barcelona. Normally the older horses would have gone on to Geneva and now they would start their rest. I decided not to follow that fall circuit, so I am arriving with my older horses fresh and my young horses ready to go, so for me it is the perfect winter."

The 2015 Winter Equestrian Festival continues with its second day of competition on Thursday featuring the $25,000 Ruby et Violette WEF Challenge Cup in the International Arena at 1 p.m. For full results, please visit www.showgroundslive.com.

Last Sunday's AIG $1 million dollar Grand Prix in Thermal was really a 'clash of the Titans'. Only 3 horse-rider combinations left the wood untouched. Also Kirsten Coe and the 13-year-old Baronez (by Skippy II). The pair set the time at 46.86 seconds, good for a third place in this...
10-02-2014

McIntosh and Estina star in Waitemata

It promised to be a battle of the ladies in the Bayer FEI World Cup final. Eleven started the prestigious class, with just three going clear in the first round. Eight came back for the second round over the Gerrit Beker-designed course. Series winner McIntosh was pleased with the effort of her top horse Estina. "I wanted to...
22-12-2013

All Class From Estina in World Cup

The former Olympian and World Champs representative, Samantha McIntosh, won the World Cup in Taupo, aboard her sometimes feisty mare Estina, backing up their victory in the world cup round at Feilding earlier this month. Samantha states; "Estina is as brave as a lion and just knows when to step...
15-12-2013

Cantando Lyngriis jumps in the picture in Geneva

At the international showjumping competition in Geneva, Switzerland Tal Milstein Stables provided one of the tophorses in the 1m45 speedclass. Under the saddle of Daniel Bluman, the 12-year-old Holsteiner Cantando Lyngriis  (Cassini I x Zarewitsch XX) jumped to a second place.  Finishing without touching the wood in  a time of...
08-12-2013

Estina all class in World Cup

Samantha McIntosh may be an Olympian and a World Champs rider but her victory today in the World Cup at the Royal A and P Show in Feilding, New Zealand is a first. Aboard the nine-year-old Belgian imported mare Estina, McIntosh (Cambridge) headed home 12 other combinations. The combination have...
22-11-2013

In the first qualifier for this year's Mechelen Freejump contest for Young Horses the popularity of Doree van de Moskifarm, a stallion ridden by Tal Milstein Stables-rider Perry Geryl is by far the most popular sire. From the 50 starting horses, Doree has no less than 3 young freejumpers at...
19-11-2013