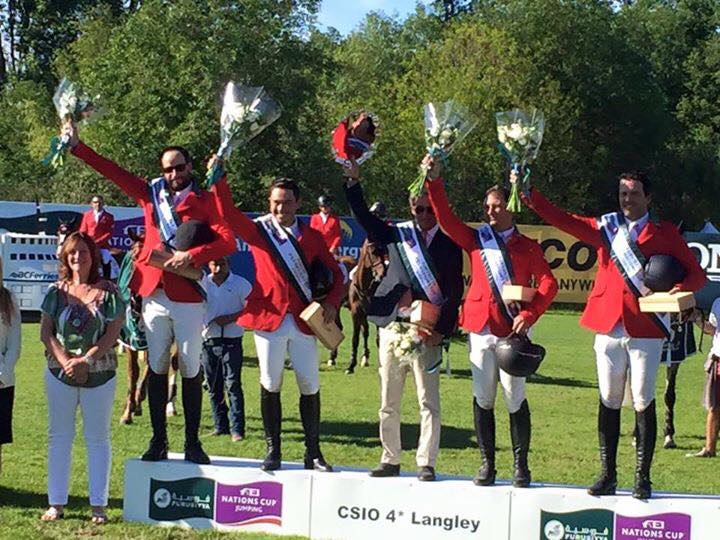 On home ground at Coapexpan Equestrian Club in Xalapa (MEX) the Mexican side broke a 26-year Nations Cup drought with an historic win at the end of April, and now that they have rediscovered their winning ways it seems they are on a roll. At today’s event they were already in the driving seat when the only one of the four competing nations to maintain a zero score at the end of the first round. And they held on to win comfortably, and without having to call up their last-line rider for a second time.

Salgado was the only member of the Coapexpan winning side to line out again today, and his nine-year-old French gelding jumped an erratic round on his first tour of the fences. But when Patricio Pasquel came home clear despite a few exciting moments, and that was followed by two more foot-perfect runs from Francisco Pasquel with Naranjo and Alberto Michan with Gigolo van de Broekkant, then Mexico led the way into round two with a clean sheet.

Their Chef d’Equipe, Norman Dello Joio, was well pleased. “The main goal when I first started helping Mexico was to get the level up. They were hitting bottom and the idea was to start from scratch and reshuffle the deck. It was the main aim to start pulling together as a team and I think I have helped doing that. There is a very positive atmosphere in this Mexican team, especially also amongst the riders that competed for us in both Ocala and Xalapa. We are now going to start really setting up for the Olympics and then get the most competitive team out in Barcelona (for the Furusiyya FEI Nations Cup™ 2016 Final) as well. We are then going to start building for the next Olympic Games in 2020 after that,” he explained.

The most experienced Mexican team member, double-Olympian Alberto Michan, agreed. “We needed to do something very special because we had a bad year last year so we had to take a check and start from scratch again. We knew we needed to do things more professionally and we started so well this season and finished as league leaders. It has been really exciting for us and very motivating for us to do things better every time now” he said.

The Global Champions Tour in Chantilly couldn't have started better! In the 1m50 CSI5* Class, Jérôme Guery and Alicante proved to be absolute worldclass! Guery’s impressive speed resulted in the top spot that was over a second faster than the rest of the field in 69.83 seconds. Also Daniel Bluman...
23-05-2016

Chloé Vranken and Tahis de Masure finished 5th in the Young Rider Grand Prix in Odense! They had an excellent weekend, after already a 1st place in the YR Nations Cup on Friday!
23-05-2016

Alberto Michan was competing with the horses in Old Salem, New York, last week. With J'adore van het Klinkhof he finished 3th and 4th in the 7 year old class. Also Elliot jumped a clear round in this class! Baronez also competed in the Open Jumper class and finished 6th....
20-05-2016

Chloé Vranken went to CSIO Odense this weekend and so far, the results are excellent! On Thursday, Elton Jones jumped a clear round in the CSI3* 1m50 class. In the CSI3* 1m35 Chloé and Chin Quin finished second! On Friday, Chloé and Tahis de Mesure were part of the Belgian Young...
14-05-2016

Alberto Michan and J'adore van het Klinkhof were jumping this weekend at Old Salem Farm. Together, the combination jumped to a 4th place in the 7-year old class.
06-05-2016

Yesterday at CSIO 4* MEXICO 2016 Club Hípico Coapexpan Conor Swail and Cenzo proved again to be in superb shape! They won the 1m45 LR Welcome class and beat the competition with more than 1,5 seconds. Also Alberto Michan jumped clear with Gigolo van de Broekkant finishing 7th and to...
01/03
Back to news page
fMarkMenu(260);