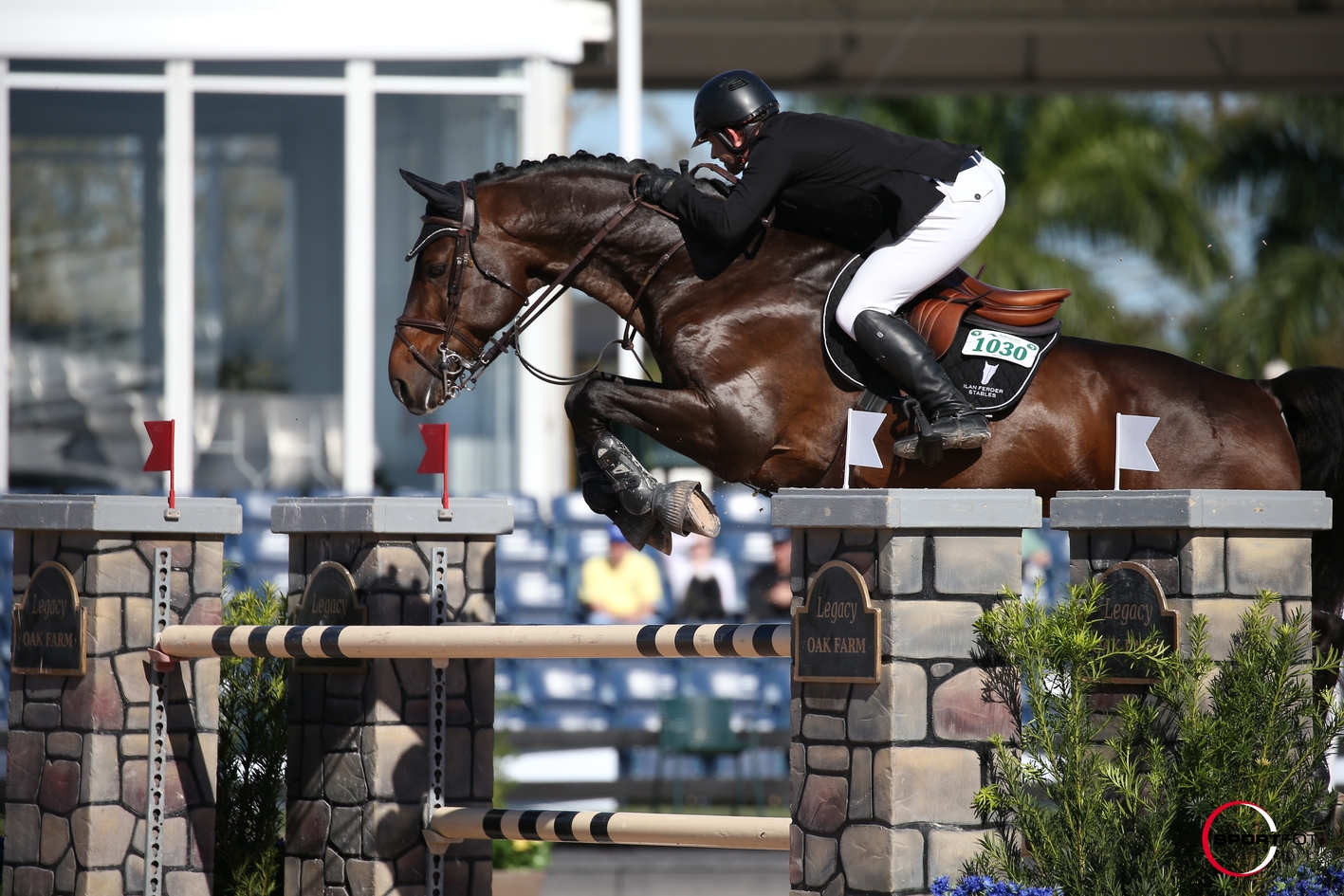 After only ten days in the irons of 12-year-old Dutch Warmblood stallion Warrant, Mexico’s Alberto Michan topped 19 pairs to win the $25,000 Suncast® 1.50m Classic Saturday afternoon. Michan recently took over the reins for owner Ilan Ferder Stables and will pilot Warrant throughout WEF.

Seven horses advanced to the second round where five produced double-clear efforts. Heather Caristo-Williams (USA) and Qui Vive Des Songes Z posted an immediate clear in 38.72 seconds. Two trips later, Michan beat her by nearly three seconds and put down the unbeatable time in 35.86 seconds. Paris Sellon (USA) returned sixth and did her best to catch Michan, but was fractions too slow for second place aboard her own Adare in 35.93 seconds. Caristo-Williams settled for third for Mr. & Mrs. Ralph Caristo.

In general, Michan admits the first week of WEF could not have gone better for Ilan Ferder Stables.

“We had the best week we could ever dream of – all clear rounds all week long. Then to win the big class we planned to do; it’s fantastic,” he said. “I have a great team and a set of horses who I think can jump anywhere in the world. I am very excited for this year, and I hope it keeps going like this.”

After a short introduction, Michan has already formed a bond with Warrant.

“I think he was happy with me. I felt him really listening and trying for me,” he said. “He has a great mind and all the scope to turn tight to a fence and jump from wherever he stands.”

Michan and Ilan Ferder Stables will take a break during Week 2 and will compete again during the Adequan® CSI 3*, which kicks off on January 27.

“There are many big classes here, so it’s a good thing I have three nice horses to jump the grand prix (classes) with. We don’t want to burn them,” said Michan who will also ride aboard Ferder’s Czardas Z and Baronez throughout WEF.

The WEF is full of exceptional results for Eric Lamaze and Check Picobello Z. Not only have they won the WEF Cup already three time this season, but also the 4* Grand Prix was a huge success for them. They finished two seconds faster than Nick Skelton with Untouched. Marilyn...
08-02-2016

Ales Opatrny became the first rider from the Czech Republic to win the Emirates Airline Dubai Grand Prix FEI World Cup Qualifier as he guided Acovaro to upstage a strong field of 28 competitors on the closing day of competition at the Dubai Equestrian Club. Third place went to France's...
30-01-2016

Yesterday in Azelhof, during the CSI2*, Enzo van de Herkant jumped a superb round in the 1m45 Longines Ranking class. Unfortunately Chloé and Enzo had to note one time penalty!
18-12-2015

Maria Schaub and Hilfiger van de Olmenhoeve have again showed their amazing capabilities. In Florida, during the ESP Festival, they have jumped to a 5th place in the $25,000 Grand Prix! Congrats!
18-12-2015

Honoust Lady and Vincent Lambrecht have jumped again to victory! This time, they finished 1st in the 1m35 class at CSI2* Lier.   The day before, they have also jumped an easy clear round in the 1m30 class: https://www.youtube.com/watch?v=YOvYTBFRSwY
07-12-2015

Chloe Vranken was competing at CSI Lichtenvoorde this weekend. On Friday she was successful with Hetman of Colors in the 1m35 and in the 1m45 class she jumped an easy clear with Elton Jones on Friday!
07-12-2015

This weekend at CSI 2* Opglabbeek Abdel Said and Alicante jumped their first show. On Thursday, the new combination was clear but had one time penalty in the openings 1m30 class. The next day they jumped the 1m35 class finishing 10th. On Sunday, in the Medium Tour final, Alicante showed...
07-12-2015

Last Saturday, Abdel Said and Castilion van Groenhove won the 7 year old class at CSI 2* Opglabbeek. Abdel Said proved to be the man in shape, also finishing second in this class with his other horse It's the Senator 111. On the third place finished Emma Augier de Moussac...
01/03
Back to news page
fMarkMenu(260);