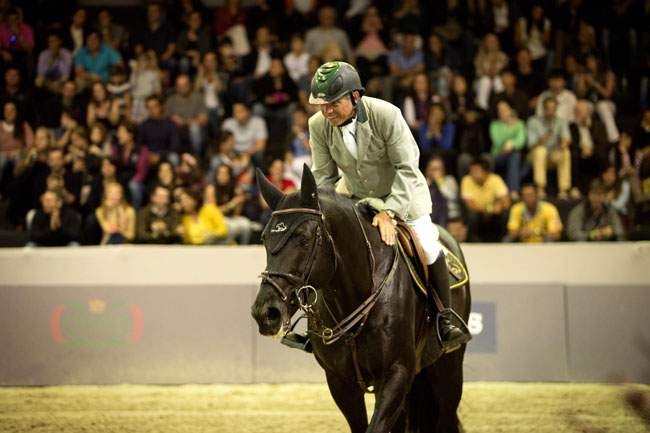 After previously finishing runners-up at events in Curitiba in April and Rio de Janeiro last month, the Brazilian, riding Zojasper Imperio Egipcio, edged out José Roberto Reynoso Fernandez into second and Luiz Guilherme Ciampi in third to claim top spot on the podium.

Almeida’s win also maintains his lead at the top of the South American South League of the Longines FEI World Cup Jumping Standings with only two events to come.

A strong field of 34 horse and rider combinations came forward for the Longines FEI World Cup Qualifier in Sao Paulo, which saw twelve progress to the jump-off decider round with ten of those going through with clear rounds.

Having produced the third fastest fault-free effort in the first round, Almedia went double clear around the shortened course in a fine time of 42.81 seconds.

That time was enough to take top spot ahead of Fernandez in runners-up spot who riding Azreael W went clear in 43.24 seconds.
Ciampi riding Barbarian Imperio Egipcio was not far behind, also going clear in a time of 43.66 seconds.

Behind the podium finishers came Tiago Mesquita who riding Baptista also went clear in the jump-off round in a time of 45.42 seconds, as did Luiz F. Pimenta Alves on VDL Valdez Assolute R G in a time of 47.57 seconds.

Conor Swail (IRL) and Cenzo narrowly edged fellow Irishman Shane Sweetnam and Cornwall for the win in the $35,000 1.45m Horseware® Ireland Opener CSI 5* to begin the week of international competition during Tryon Fall V at Tryon International Equestrian Center (TIEC). Swail and Cenzo made quick work of the jump-off...
21-09-2016

Alicante wins Sires of the World 2016

An impressive jump-off by Belgium's Jérôme Guéry and Alicante secured the victory in the prestigious 'FEI Sires of the World' in Lanaken on Friday. Guéry was on fire, also taking the third place aboard his relatively new mount Garfield de Tiji des Templiers. Switzerland's Arthur Da Silva and Inonstop van...
05-09-2016

This weekend all our riders are participating at CSI3* Beervelde. Yesterday in the CSI3* 7-years old class Diesel GP du Bois Madame and William Whitaker jumped double clear. In the 1m30 both Alberto Michan with Ujade Ste Hermelle and Chloé Vranken with Urfee des Luthiers (video) jumped a double clear...
03-08-2016

Last week Chloé Vranken participated at the European Young Riders Championships in Millstreet, Ireland. Tahis de Masure and Chloe started great with a first clear round and a clear round for the first team round, bringing Belgium on a first place. Unfortunately for the Belgian Young Riders the luck was...
18-07-2016

During the Pan American CSI5* at Spruce Meadows, the horses have shown succesfully. Baronez, Chapeau and Hetman of Colors all jumped a clear round in the 1m45 Mercer Cup. Juan Jose Zendejas and Viva Colombia finished 10th in the Friends of the Meadows U25 Cup – 1.45M after a clear...
18-07-2016