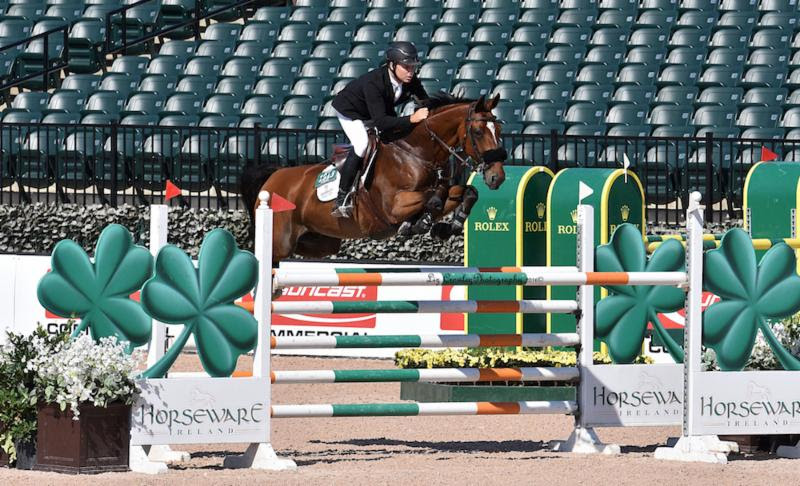 Sharn Wordley (NZL) and Famoso D Ive Z owned by the Sky Group & Sharn Wordley, kicked off the first day of competition at Tryon International Equestrian Center (TIEC) ringing in the start of the 2016 Tryon Summer Series with an impressive win in today’s $35,000 1.45m Horseware Ireland Opener CSI 3*. The pair clinched the win with a hasty time of 69.14 seconds, besting a talented field of 33 competitors.

Wordley and Famoso D Ive Z, a 2007 Belgian Warmblood gelding (For Pleasure x Chin Chin), have been partners for little over a year now, and have exhibited their talents in multiple FEI classes so far this season across the United States, as well as at TIEC.

Famoso D Ive Z excels in any type of class, which Wordley elaborated is a major component of his versatility and athleticism. The duo had amassed a string of consistent performances throughout the spring circuit and Wordley has fine-tuned what makes the gelding truly competitive in the ring.

“He has a massive stride and you can go really fast into big jumps and combinations,” he detailed. “I made up a lot of time between fences two and three because I could keep galloping down the long approach to the combination. He is just an extremely fast horse. When he is clean, he is hard to beat. He is great to have on my team,” he elaborated. “Looking forward for the rest of the week, Famoso D Ive Z will compete in tomorrow’s FEI ranking class, and then my main mount, Casper, will also contest the ranking class tomorrow and the Grand Prix on Saturday night.”

All eyes were on 2014 and 2015 Derby winner Trevor Breen as the final day of competition unfolded at the Hickstead Derby Meeting to see if he could make it three wins in a row of the Equestrian.com Derby. But this time it was England’s William Whitaker who took a...
27-06-2016

On Friday the 1m55 class of GCT Monaco was quite succesful for Jérôme Guery and Alicante (Casall x Indoctro), another dangerously fast combination who saw double success in the LGCT Chantilly speed classes earlier this month. Guery and Alicante gave it there all, and came excruciatingly close to Allen’s time,...
20-06-2016

In the CSI4* Langley Grand Prix, Alberto Michan and Gigolo van de Broekkant finished second. The $129,500 Nations Week Finale Grand Prix proved to be a difficult course with only two double clear rounds. Nayel Nassar won the class with Lordan being one second faster than Alberto and Gigolo.
06-06-2016